He became an Associate Professor in 1989 and in the same year, he had vascular surgery education at Londra Charing Cross Hospital. In 1990, he was a guest lecturer at Ochsner Clinic, New Orleans USA. He achieved the title of Professor in 1996. He undertook the duty of editor for Vascular Surgery (Damar Cerrahisi) magazine between 1989 and 2002. From 1994 to 1998, he was a member of the Editorial Board of the Journal of Endovascular Surgery magazine and between 2000 and 2005, he was a Member of the Board of the National Vascular Surgery Association (Ulusal Vasküler Cerrahi Derneği).

Dr. Murat Kayabalı has continued his vascular surgery operations for 22 years since 1985, the year he became a specialist and during this period he has performed over 2500 surgeries. In Turkey; he executed the first in-situ fem-pop by-pass in 1989, and the first endovascular aneurism repair in 1998; he performed 280 carotid endarterectomy, 90 endovascular aneurism repairs, over 1000 lower extremity arterial reconstruction operations; since 2003, he has been performing carotid, renal and peripheral balloon and stent operations. Thus, regarding open surgery attempts or endovascular (balloon and/or stent) attempts, different treatment methods can be offered to patients according to their personal illness profiles and in some patients, using both methods in combination (hybrid attempt) can substantially increase the chance of success.

Dr. Kayabalı has been teaching as an academician at the Peripheral Vascular Service of the Department of General Surgery of Istanbul Faculty of Medicinesince 1989. As of 2003, he works at Florence Nightingale Çağlayan Hospital’s Vascular Surgery Division. He has successfully passed European Board of Vascular Surgery examination in 2010. 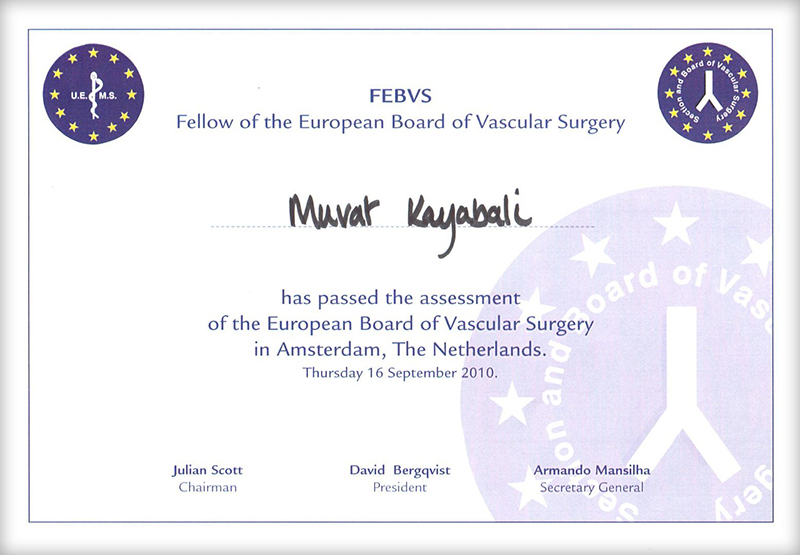