If the diameter of an artery increase more than 50% of its normal diameter is called an aneurysm. In most cases, the reason is the reduction of the substances, which provide flexibility of arterial wall, due to age. It is mostly seen at the aorta, arising from the heart, feeding the internal organs and legs. Its frequency increases by age. Between ages of 50-60, 50 out of 100000 people have aortiic aneurysm while this frequency rise to 300 at ages 70 to 80. Approximately 1.5% the population over the age of 65 are affected from this disease. It is four times more frequent in men than women. 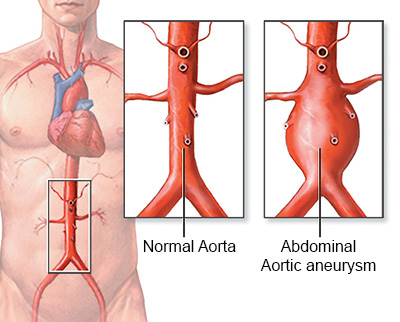 Aortic aneuysms usually do not show symptoms and are found at routine examinations or coincidentally during screenings for other diseases (ultrasonography, computerized tomography, MR). Few of them show symptoms. The pulse may be felt at the abdomen or it may exert pressure on adjacent organs. Aneurysms are feared due to their complications and aortic aneurysms exceeding a certain diameter must be cured because of such complication risks. Aneurysms can be ruptured, damage adjacent organ walls and bleed into these organs or clots from aneurism may split and occlude leg arteries. Most feared complication is the rupture of the aneurysm. As the diameter of the aneurysm gets greater, its possibility of rupturing increases with a direct proportion. According to the studies, annual rupture risk of an aneurysm larger than 50 mm. is 5-7%, while it can reach up to 30% in an aneurism with a 75 mm. diameter. Most ruptures create a life threatening situation (Death risk after rupture 50-75%). Therefore all aortic aneurysms over the 50 mm. limit accepted today, must be operated unless there are significant medical drawbacks.

The treatment options are; open surgery and endovascular aortic reconstruction (closed method). Whether which method is proper for the particular patient is decided upon the detailed measurements made on computerized tomography. In open surgery, the abdomen is opened and the aneurysm is repaired by placing an artificial vascular graft. This method is performed by general anesthesia. In closed (endovascular) method, the patient is either anesthetized by epidural anesthesia or local anesthesia application to the groins.. Since this patient group is generally formed of elders and has additional illnesses, general anesthesia complications are avoided this way. Special measurements are made on the computerized tomography received before the operation, and the most convenient artificial graft sizes are calculated for the patient. Both groins are opened uu, with 4 cm incisions and femoral arteries are opened for the insertion of the endovascular device.. The artificial graft supported by stents are administered from here to the aorta, placed inside the aneurysm and fixed by the stents. It is usually sufficient for the patient to rest at the hospital for 2-3 days. Controls are made through annual tomographies. 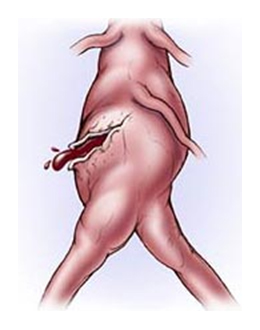